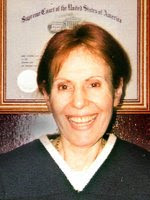 Judge Nadelson brings a varied background to her judicial position. She began her career as an educator before entering the commercial world and operating her own business. Following a clerkship with the New York State Attorney General’s Office in the Investor Protection and Securities Divisions, she entered the private practice of law. Her focus was on corporate and commercial matters, representing both entrepreneurs and consumers. For nearly two years during her legal career, she developed and oversaw the curricula and course studies for New York University’s Law and Taxation Division. Judge Nadelson also actively participated as an arbitrator at the State Courts and American Arbitration Association and provided services to the Federal Court Pro Se Office. She is admitted to practice in the Southern and Eastern Districts of New York, as well as before the esteemed justices of the United States Supreme Court.

Ms. Nadelson holds a B.A. degree in Economics/Political Science. While working full time, she attended law school and was elected to Law Review, serving as a senior editor.

Judge Nadelson is a former president of the New York City League of Women Voters, and was elected to the New York City Civil Court in 2001. Shortly after her induction, Judge Nadelson began an outreach to the public and legal community by providing seminars on the subjects of Contracts and Civil Court Practice. She also speaks at public forums on topics such as Small Claims and Court Procedures, Handling Consumer/Merchant Disputes, and Avoiding Scams. Since February, 2006, she has been presiding as a judge in Criminal Court, Kings County. Judge Nadelson’s accomplishments are recognized and listed in a number of prestigious registries including, Who’s Who in American Law, Who’s Who in America, Who’s Who of American Women, and Who’s Who Worldwide.
Posted by enadelson at 10:34 PM